Posted under Uncategorized on May 31st, 2017 by Heirlooms4Posterity

The month of May was a tough one. Well, to be really honest, the whole of this year was tough and heavy on the soul. I won’t go into too much detail about what has happened, plus I’ve written a post about it, so feel free to be in the loop by reading it.

Yes, my father is gone. I cannot believe it has almost been a month. I am so blessed to have wonderful friends and family who have helped me stay strong and have, at the same time, taught me that it’s okay to sometimes not be okay. I have also had a little help from my furry little creatures which are just as much my family as those who use two feet to walk with. The love, graciousness about life and kindness from animals are incalculable and cannot be quantified by our little inferior human means of measure.

I have gotten more wet kisses, warm hugs and cuddles than I ever thought possible. My tears were wiped away numerous times by my two little angels.

And now I only have one little furry angel with me.

I have had Lili since she was a tiny little thing and she’s been a huge part of my life for the past five years. Rex, on the other hand, was a little more unplanned and a decade or so older when I got him, but I loved that dog just as much.

He had a heart that shone through his eyes. His love was palpable. His story is a mixture of sadness, agony and one of love. 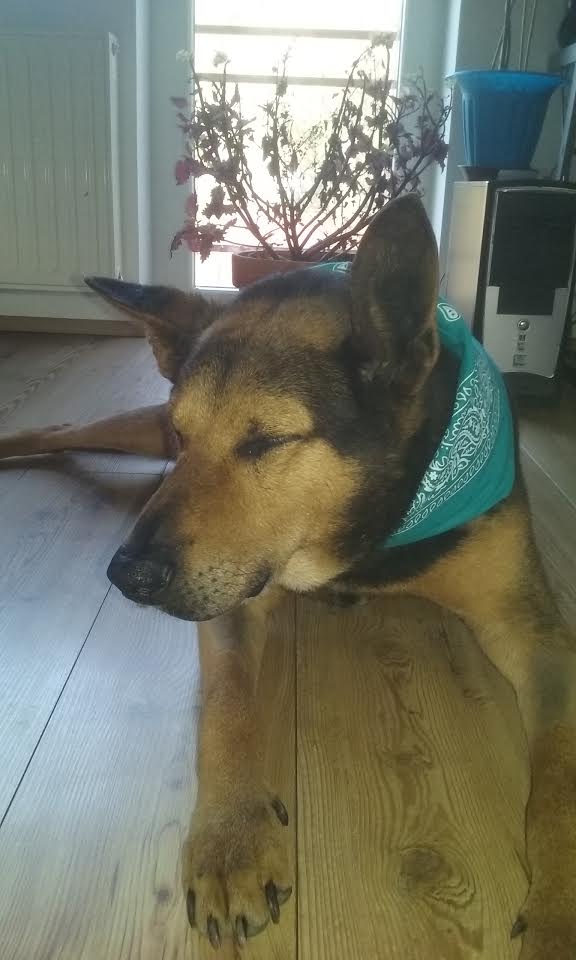 I got him from our local shelter after seeing him on Facebook and reading that he has gone unnoticed for almost five years. Five years! My heart broke for those caramel eyes. I wasn’t planning on getting another dog, but something told me that it was a path that had to be taken. The keeper at the shelter told me he was found starving in a box on an abandoned farm and has since had little luck of finding someone to take care of him. He had a gentle disposition and a friendly attitude and we were all a bit beguiled as to why he wasn’t adopted earlier. His size didn’t help him. He was a big boy: I think he was a doberman-shepherd mix. He was also old. He was at least ten or eleven when I found him last November. He was ill and was gaining weight rapidly. They performed some tests and after they came back negative for some sort of syndrome, we took him in. I knew what I was very probably getting myself into. Two days after we took Rex into our home, I found that my dad was seriously ill and had little time left. I knew I had a hard road ahead of me: I had to be there for my dad, for my mom, for my family, had to work and take care of two fur balls: both with specific health problems.

There wasn’t any love lost for Lili. She treated him like she would a piece of furniture that was a bit annoying because it wanted to sniff her butt all the time. She quickly learned that he was slow and could easily steal his treats, climb on the couch where he couldn’t reach her (not that he ever tried) and ate his food (the little witch!). He was never bothered by it.

He was happy to be loved, well fed and that there was always someone there with him. He tried so hard to please us: he stopped marking the inside of our house, learned to wait for his food patiently, learned to stay on command and learned to bark from Lili. Oh, what a barker he became! 🙂

Love came naturally to him. He treated me like his guardian angel an in turn became one for me- even if I didn’t ask that of him. He became protective and wouldn’t allow any mischief in my company. He was big and so people were a bit afraid of him. I found it amusing. He loved it when I sang to him and his favorite song was “Can’t Help Falling In Love”. He’d put his big head on my knees and fall asleep whenever I sang it to him.

But his lungs wouldn’t let him stay with me for long- the parallels with my dad’s story were painful, to say the least. As it grew warmer, his breathing became heavier and it became so bad that his tongue would turn blue and he couldn’t catch his breath. He also had problems with his joints, we couldn’t get his weight down and so he started going down quickly.

We had to put him to sleep two weeks after my father died. He fell asleep with his favorite song in his ears.

I sometimes wish I could turn back the clock and find him in his younger years. He had so much to give. All I can really do is find comfort in knowing he found love- however brief it was. I love my big boy and even though taking care of him took a lot of time and energy I barely had because I also had to take care of my dying dad, I wouldn’t take any of it back. He’s part of what helped me get through those days and nights of true terror and torture. He’s helped me prepare for what was to come.

I promised my father to live bigger, better and bolder in his name. I also promised Rex to help spread some love, kindness and awareness of those around us in need. I’ll do my best to make both of them proud to have been a part of my life and me be a part of theirs. My life is blessed because I have so many guardian angels.

I Miss You So Much …

Posted under Uncategorized on May 9th, 2017 by Heirlooms4Posterity

My dad used to drive me to high school almost everyday. We had this easy-going relationship back then. We both liked Shakira, so we’d listen to her music in the morning and speed down the motorway in silence. If we ever passed a truck with cattle, I’d always ask him where he thought the animals were going. I knew the answer, of course, but my dad knew better than to tell me the truth. He lied. He lied because he loved me enough to try and spare me.

That’s also the reason he lied about his illness. He hid the fact that his cancer was causing him a lot of pain for two years. He knew and decided not to tell us. He worked through his last stages of cancer and suffered in silence. I can’t imagine the pain he must have gone through.

But the tumor in his head grew too big and he lost his grip.

Early December came and so did his diagnosis: stage four small-cell lung cancer that was spread all over.

Six months have passed and he is gone.

They were the worst six months of my life. His illness ate him alive and there was nothing I could do, but be there.  I rearranged my life to accommodate what was left of his and I would have done anything to spare him the agony of his last few moments. All I could do was stuff him with pills and pray he’d sleep, then gently rub his arm to try and soothe him.

I would sometimes pray he’d fall asleep and not wake up in the morning. He begged me to kill him and I wished I could give him what he wanted.

But I learned life is too short not to tell someone you love them and so I told him I loved him and for the first time in my life, I really heard him saying it back to me without feeling awkward.

I loved my dad. I love my dad. And I will always love him.

He was my rock. His smell calmed me down and hearing his footsteps brought me ease. And now he’s gone. And I miss him so so much.

We had our arguments and things were sometimes far from rosy, but I wouldn’t have anyone else be my father. I cherish all the spoken and unspoken words and I wouldn’t take any of it back. This experience was a life lesson that hit like an atomic bomb: I will live bigger, better and bolder in my dad’s honor. I miss him, but I won’t let that be the focal-point of my life. Missing him will only fuel me to do better and be a better person.

Dad, I miss you so much. I wish I could touch you just one more time and tell you that I love you and that I’ll make you proud. I’ll try and be there for mom and my sisters and brother. I’ll take care to be there if and when they need me. Your life was riddled with sorrow and pain, but it made you who you are. I’ll make sure to catch those important life lessons when they come my way and I’ll make sure to create something good out of them.

I’ll be the change I want to see in this world.